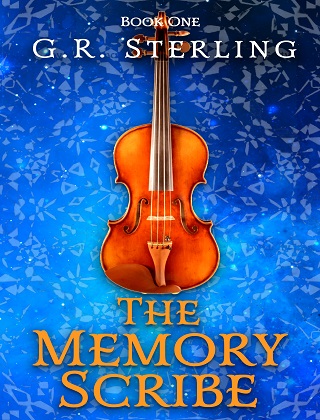 The memory scribe is a magical fantasy novel from author G.R. Sterling.

After the death of his grandfather, Charlie is left only with the memories of Gramp’s otherworldly stories and his violin. When a pretty girl named Ridley steals it, Charlie and his sister Sarah chase her to a magical island they thought their grandfather had imagined—where music grows the trees, where dreams come alive, and where an evil queen is trying to pull the inhabitants into her nightmare.

When Charlie enters a forest camp, he discovers the thief, Ridley, is preparing to fight the queen. As Charlie begins to fall for Ridley, he realizes he’s hindered her prospects by unknowingly increasing the queen’s power. He and Sarah attempt to prove their worth to the camp, but many islanders despise outsiders, including Ridley’s family. Charlie attempts to practice magic, and he takes a job recording memories while he secretly searches for a way to reverse the accident he caused. Sarah endeavors to learn medicine until Ridley’s human-loathing cousin ends up in her care, with suspicious injuries.

As the queen’s power threatens to take over the camp, bending the people and trees to her will, the camp becomes weary of the humans. Will the memories and music be enough for Charlie and Sarah to save the camp before it turns on them?